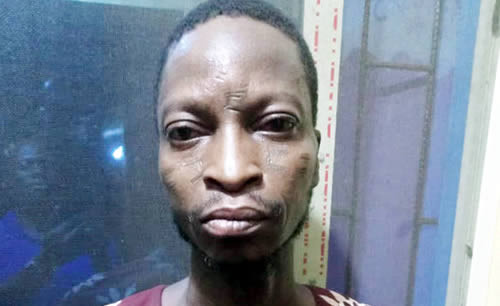 A 45-year-old man, Idowu Owolabi, has been arrested by men of the Ogun State Police Command, for allegedly raping his 21-year-old daughter.

According to the state police command’s spokesperson, Abimbola Oyeyemi, Owolabi who has three wives, started having sex with his daughter last year at their home in the Papa Olosun area of Oja-Odan in the Yewa South Local Government Area of the state.

The suspect was arrested after his daughter reported him to the police on January 28th.

“The victim reported that she followed her father to the farm at Fagboun village and the said father forcefully had carnal knowledge of her right there on the farm sometime in March 2018. She stated further that since then, her father had continuously been having unlawful carnal knowledge of her with a threat that he would kill her if she dared tell anybody about it. Upon the report, the DPO Oja-Odan, CSP Olayemi Jacob, led his detectives to the suspect’s residence, where he was promptly arrested.

“On interrogation, the suspect, who was said to be married to three different women, confessed to the crime but blamed it on the devil” Abimbola said

Abimbola added that the Commissioner of Police, Ahmed Iliyasu, has ordered the immediate transfer of the case to the State Criminal Investigation and Intelligence Department for proper investigation and possible prosecution of the suspect.

@https://twitter.com/yourdailyng
Previous MC Oluomo returns to Nigeria after medical treatment in the US
Next ‘I don’t care if I lose the election’ – Kaduna State governor, Nasir El-Rufai says