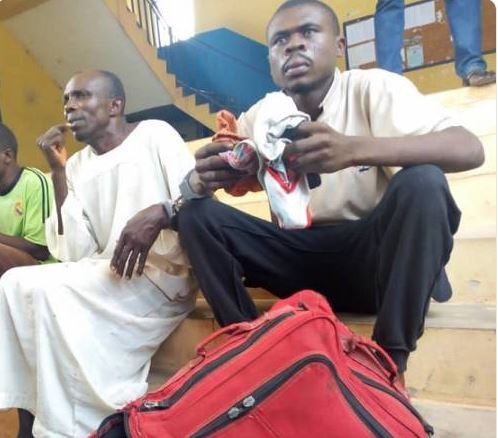 A 25-year-old panel beater identified as Adejoh Ojonugwa has been arrested in Ondo State for stealing underwear belonging to his elder brother’s wife.

He was apprehended by officers of Ondo State Police Command after the case was reported.  The suspect was nabbed alongside one Prophet Olajide Ogunleye of the Celestial Church of Christ, Ibanujemidopin Parish in Uso Local Council Area of the state.

During interrogation with reporters, Ojonugwa, a native of Kogi State, said he only visited the prophet for spiritual cleansing as he needed a solution to his problem. Narrating his side of the story, he said: “I went to seek spiritual cleansing from Prophet Ogunleye and when I got there, he prayed fervently for me. In fact, he asked me about the job I do, and I told him that I am a panel beater, which has been my trade for a very long time.

“Later, he asked me to open my hand, and he dropped something on it for me to swallow, which I did. After I swallowed it, he prayed for me and I left his place. But when I got home, I became unconscious.

When the Police arrested me, I was taken to Uso Police Station before they transferred me here to Akure. Two of the items belong to my brother’s wife and three belong to my younger sister.”

The Prophet, however, denied the allegation, stating that he was only being implicated by the suspect.

His words: “I am a true man of God and I have never seen the boy (Ojonugwa) in my life. He is just lying against me. The truth of this matter is that they came to me for a parcel of land and I refused to give them. I never asked him to bring any underwear for rituals. So, they feel it is an opportunity to implicate me in this crime since I had refused to give them the land to cultivate Indian hemp.

“Though, I engage in some spiritual cleansing for people, mostly pregnant women who have difficulties so they can give birth early and easily, I don’t engage in rituals as it is against the belief of our church. I only see the allegation as pure lies against me.”

Visibly angry, the elder brother of the suspect, Benjamin Ojonugwa, said his younger brother had always wanted to have money “by all means, even through rituals. He is my own younger brother and has always been in haste to have money through any means, but I just thank God that he was exposed. He stole my wife’s underwear, and wanted to use it for ritual purpose, so that he will have more money than me,” he said.

Grace Ojonugwa, the victim, confirmed that the suspect stole her underwear from where she spread it to dry in the house. “It was my husband’s younger brother that stole the pants. He was actually trailing me to spread it and when I discovered that the pants were missing, I knew he stole it,” she said  Femi Joseph, spokesman of the Ondo State Police Command, said the suspect and the Prophet were arrested last week by the Police.

Joseph, a Deputy Superintendent of Police (DSP), said the cases of “stolen female underwear” were now becoming a trend and advised ladieas to be on their guard.  “We have to guard whatever we are putting on. I also advise parents to warn their children, particularly females, to be very careful where they keep their undergarments,” he said.  He added that the suspects would be charged to court soon.