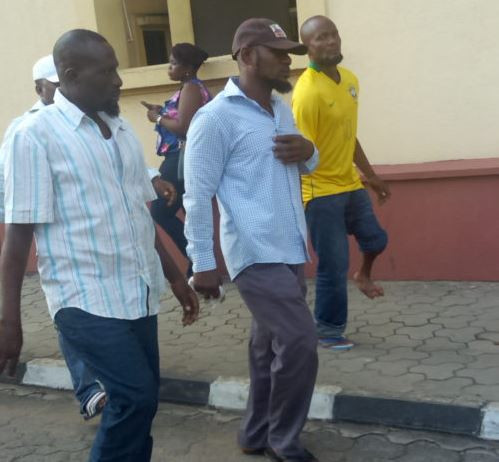 In a three-hour judgment which started at 2.35p.m., the judge held that the prosecution was able to prove beyond reasonable doubt that Arogundade murdered the policeman. Before delivering the judgment, for security reasons and to avoid disruption of proceedings, the judge ordered that the courtroom should be locked and the keys kept in her possession.

“The prosecution has been able to prove beyond reasonable doubt, the ingredients of conspiracy to commit murder and murder against the first defendant (convict).

“I therefore pronounce the first defendant guilty as charged on the counts of conspiracy to commit murder and murder.

“I hereby pronounce the sentence of the court upon you Saheed Arogundade – that you be hanged from the neck until you are dead. May God have mercy upon your soul,” Akinlade said.

On hearing the sentence, Arogundade collapsed in the dock while his relatives wailed in the courtroom gallery. According to the prosecution led by Mrs C. Rotimi-Odutola, the convict committed the offences on April 10, 2010, at Gbara Junction, Aiyetoro, Ajegunle, Lagos.

“The deceased was on a commercial motorcycle to visit his mother, Mrs Mojisola Martins, in her home on Olayinka Street, Ajegunle, when they were ambushed and attacked by four men at Gbara Junction.

“Oladipupo was held down by three men and the convict stabbed him multiple times before fleeing with his accomplices.

“The deceased who was gravely injured, was taken to a hospital at Opaleye Junction in Ajegunle where he passed away,” the prosecutor said.

According to her, Oladipupo was murdered because he purportedly encouraged the use of commercial tricycles in Aiyetoro, causing loss of income for the NURTW unit. The offences contravene Sections 234 and 316 of the Penal Code Law, 2003.

@https://twitter.com/yourdailyng
Previous Body has been retrieved from plane that crashed but investigators cannot say if it’s Emiliano Sala or pilot David Ibbotson
Next Body bags comment: ”I was only defending Nigeria’s sovereignty” Governor El-Rufai