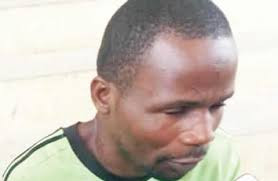 A 39-year-old security guard, Longbab Bouguen, has been arrested by men of the Ondo state police command for assault and attempting to rape a prophetess (name withheld) at the Agbogbo area of Akure, the state capital.

Parading the suspect before newsmen, the spokesperson of the command, Femi Joseph, said Boughen with an alleged accomplice, Daniel John, had ambushed the victim while she was returning home on the day of the attack at about 8pm, stole her money and then raped her.

“One prophetess of the Celestial Church of Christ located in the Agbogbo area, along the Akure/Owo Expressway, reported that a security guard, Longbab Bouguen, suddenly dragged her to a secluded area and forcefully tore her pants in order to have sexual intercourse with her.

The suspect threatened the victim by brandishing a cutlass and knife, while putting on dark eye glasses and also dispossessed her of the sum of N700, which he consequently shared with a fellow security guard, Daniel John.”

Speaking to newsmen, the victim said

“I discovered that he was following me when I was going to the church and suddenly he grabbed me from the back and dragged me to one corner. I struggled with him but he overpowered me and showed me a knife, threatening to kill me if I shouted.  I didn’t want him to stab me because there was nobody around to rescue me. As he was struggling with me, he tore my clothes and my pants; I didn’t allow him to penetrate so he ejaculated on my body. Thereafter, he collected the money on me before allowing me to go”.

When interrogated, the suspect blamed the devil for influencing him to commit the crime

“Though I attacked her and tore her clothes and pants, I had not penetrated her before I ejaculated on her body. I allowed the woman to go after collecting the sum of N700 on her” he said

According to the police, the suspect and his accomplice will be charged to court soon.